People have performed ritual and ceremony for thousands of years using Circle as the blueprint for their sacred rites. A circle represents the cycles of life, the seasons, the procession of Sun and Moon and often the dwelling place or home. There is no hierarchy in a circle of people, all are equal around the circle, they can look one another directly in the eye and be seen openly.


Our ancestors also recognised that when they conducted important ceremony in this way, the Earth on which they stood responded to their consciousness. They sometimes marked these special places of ceremony and ritual with elaborate structures or buildings, tree plantings or natural features and some of them are still standing to this day. Sometimes these circles were in use for thousands of years and some still are, sometimes they were temporary. But over the years of repeated use, the awareness of the people using them was affected by the place on which they conducted their rites and the Earth energy in those places changed, strengthened or weakened according to the consciousness of the people. You might say that our ancestors understood the symbiotic nature of our interaction with the Earth. If we bring back the principles of these Sacred Circles by regularly taking part in ceremony or ritual at a certain place now, we too can experience a rising level of awareness in our consciousness. We will also be re-energising the Earth in these places and very likely re-connecting dormant leylines or Earth energy structures that are vital to our own and nature’s wellbeing. 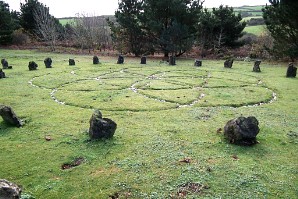 terry and Lynn Forrest have been working with these energies and ceremonies for over two decades. They have experienced the effects and implications of creating Sacred Circles in many places, including Europe, Australia and Scandinavia. When a group of people want to restore the magic and power in their land and their community, terry and Lynn can help create a meeting place that can be regularly used and empowered. This re-enchants the leylines, encourages the health and wellbeing of the people and brings both society and the land back into balance.

Sacred Circles can be the starting point for so many positive improvements that the creation of a Circle often leads to positive personal development and growth, plus a greater sense of community in that location. A Circle can be created and established over a couple of days and used immediately. Lynn & terry can facilitate individuals and small or large groups to make their Circle and offer basic instructions and understanding as to how to use it with appropriate ceremony. 2 Full days - 2,200 SEK per person (4 people minimum) plus expenses.

“Then I was standing on the highest mountain of them all, and around and about me was the whole hoop of the world...

And I saw that the Sacred Hoop of my people was one of many hoops that made one circle,

wide as daylight and as starlight and in the centre grew one almighty flowering tree to shelter all the children of one Mother and one Father,

and I saw that it was holy”. 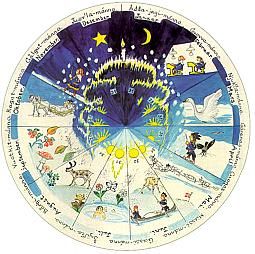